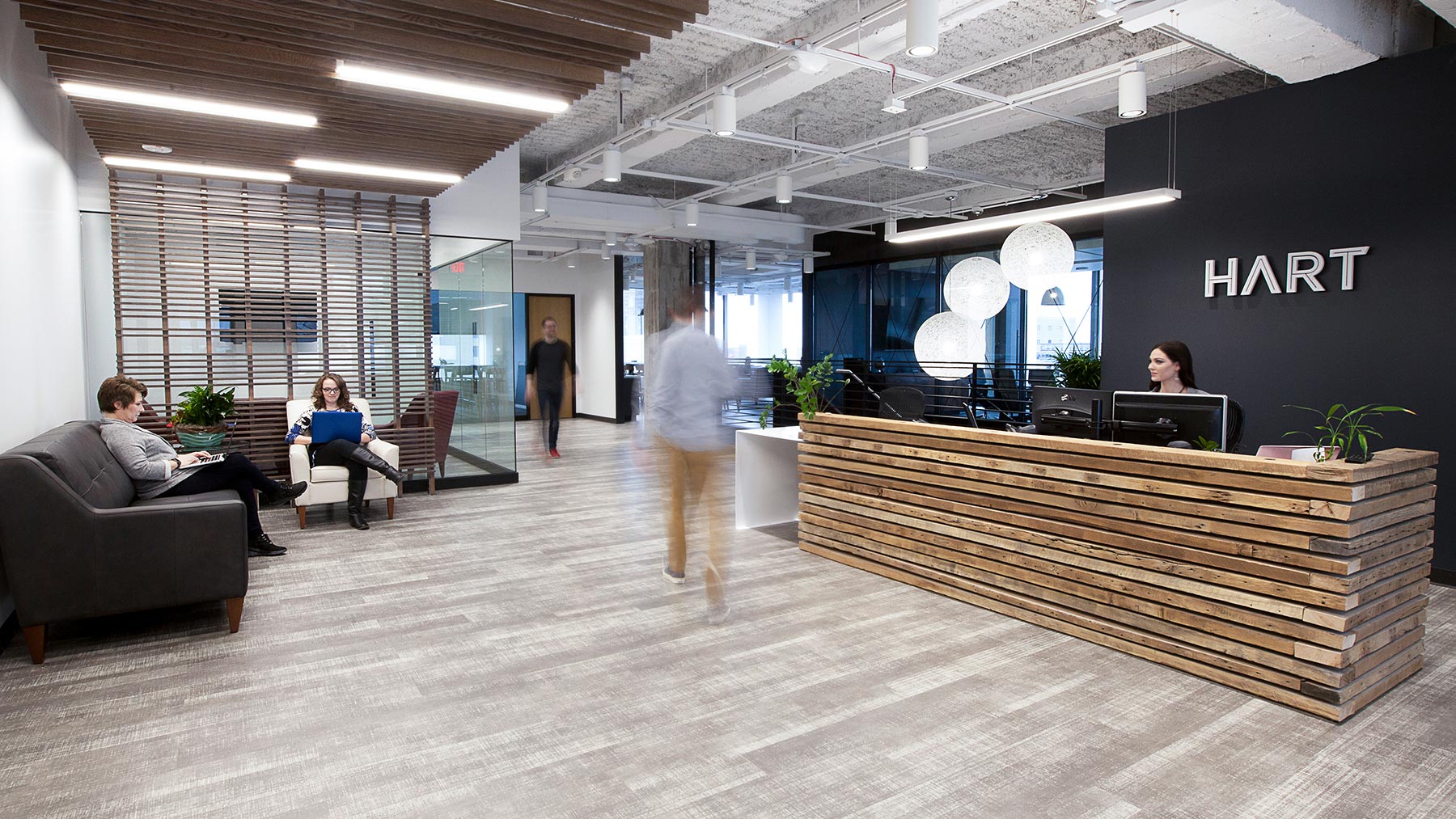 Toledo, Ohio, March 19, 2018 – Hart, one of Ohio’s largest independent marketing and advertising agencies, is beginning a new chapter with its new headquarters in downtown Toledo. The office is crafted to be a reflection of the work and style of the agency today, as well as pay homage to the city it calls home.

Over the last seven of its more than 50-year history, Hart has experienced significant growth. The firm now employs about 80 people – 60 based in Toledo and 20 based in Columbus. The new office was designed specifically to align with the agency’s workflow, allow more space for Hart’s Columbus team members to work on-site and accommodate future growth.

The 20,000-square-foot space, comprising floors five and six of the Hylant Building at 811 Madison Ave., is designed to enhance collaboration among employees and clients. Construction included cutting a hole in the floor to seamlessly connect the two floors with a staircase that increases accessibility between team members. Throughout both floors, there are more than 20 areas for collaboration to encourage integrated idea generation.

“Our new space is a visual representation of the work our staff delivers every day,” said Marc Paulenich, COO and Senior VP of Strategy. “We build work with integrity and purpose that makes an impact for our clients. We’ve embraced the ‘makers mentality’ that’s true to our region.”

Local artists and craftsmen made significant contributions. The new space is filled with tables, chairs and installations that were sourced locally and created uniquely for the Hart office. Two Toledo-based firms were integral to the creation: The Collaborative handled architectural development, and Rudolph Libbe managed construction.

One feature of the building is floor-to-ceiling windows around all four sides. These 360-degree views of downtown Toledo provide inspiration and serve as a reminder of the agency’s roots.

“Toledo has always been my hometown,” said Mike Hart, president and CEO. “I’m proud that the next great step for our agency is also a contribution to the revitalization of the urban core of our city.”

Coinciding with its move, the agency has refreshed its identity that will lead into the future development and growth of the agency. It has also fully integrated its Columbus operations after acquiring Conrad Phillips Vutech in 2016; the CPV name has been retired as a result.

Hart is an independent, full-service marketing firm with offices in Toledo and Columbus, Ohio. True to our founding principles, for more than 50 years the agency has integrated unique talents and perspectives to create a client-first mentality. Today, Hart is a collection of 80 thinkers, creatives and builders whose expertise spans strategy development, advertising, media services, video production, digital marketing, public relations and content marketing. hartinc.com